Joined 4 mo ago
·
9 Posts
This weekend we were driving from Reno to Phoenix pulling a 5th wheel trailer. When we were in Arizona in a cellular dead zone the turbo pipe blew as we were got near the top of a long hill. It sounded like a tire blew with a lot of air, but I didn't know what happened. As we were going down the other side of the mountain a message came up that side the particulate filter overheated and we needed to stop as soon as it was safe. Since their was no cellphone signal we drove a couple miles to a turn out that had an emergency phone sign. When we barely got off the hwy the truck died. I found what felt like a crack in the pipe as it went into the intake manifold.

The truck showed some codes. I think it was P1247 about the turbo boost pressure being low. Then one about Cylinder 4's contribution not being consistent and some about the DPF overheating. Lost my screenshot of the codes so I can show you all of them.

The truck would not start, but since it was not completely off the road I wanted to move it before I went to find the phone and try to call for a tow. After about 20 minutes it started. I assumed it was when the DPF had cooled. We were about 40 minutes from Wickenberg, so we head into town to see if we could fix it.

Nobody had any parts, so I JB Welded the pipe back together and we headed to Phoenix. The JB worked ok. Looked for an aftermarket replacement, but couldn't find anything available over the weekend. I figured that since the JB weld was holding we could make it home and then get something.

When heading up the mountains out of Phoenix I found that power was low and fuel mileage was worse than it was. Now we were getting 7mpg instead of the 9.5 we were getting on the way to Phoenix. When we got about 50 miles from Las Vegas the JB Weld failed. We drove into Vegas and found a dealership with the cold side pipe. It was amazingly only 112 dollars or the whole pipe w/sensor from the Intercooler to the intake manifold.

We continued on our trek home at the somewhat reduced power and poor fuel consumption.

When we got about two hours from Reno we got a message that Engine Power was Reduced. We started getting a P0087 (Fuel Rail/System Pressure - Too Low) OBDII code.

Where should I start on this besides pulling the cab and rebuilding the entire engine and exhaust system.
S

Joined Dec 2, 2018
·
224 Posts
This cvold air pipe is a known problem. Here is the solution for your truck. Don't go and buy the stock one. Get one from Rudys. Here is the link. 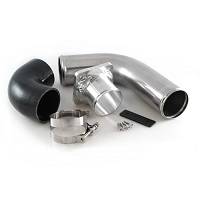 rudysdiesel.com
This will completely solve your problem. I hear the DPF will get plugged if you drive with a leak in this pipe.

Stroking it said:
I hear the DPF will get plugged if you drive with a leak in this pipe.
Click to expand...

ford_doctor said:
Correct. Intake leaks will totally mess with the exhaust aftertreatment system and will compound loss of power conditions already being caused by the loss of boost pressure. Also, repairing this CAC tube will not address the low fuel rail pressure concern - P0087 could be simply caused by restricted fuel filters or something more sinister like high pressure fuel system failures, either would contribute to power loss if allowed to advance in severity.
Click to expand...

Ok, I seemed like the diesel we go at one of the stops is when some of the power loss issues started. I will try replacing the fuel filters and see if that helps. Kind of irritating since I just replaced them in January and they aren't cheap. Got my fingers crossed.

Bugzuki said:
Ok, I seemed like the diesel we go at one of the stops is when some of the power loss issues started. I will try replacing the fuel filters and see if that helps. Kind of irritating since I just replaced them in January and they aren't cheap. Got my fingers crossed.
Click to expand...

You could simply inspect the primary filter to see if there is anything funky going on there especially if you just serviced them. You never know if you are getting a bad load of fuel containing debris, dirt or rust. Just one caution - if you didn't adequately lubricate the filter cap o-ring it may grab and stretch causing an air leak after reassembly. I always recommend lubing the ring liberally with clean engine oil and then wiping the sealing surface of the cap with oil before spinning it up. Over the years I have found that using diesel fuel does not lubricate well enough and oddly, using grease can cause the o-ring to grab and some people use too much witch can prevent the o-ring from seating in the groove and they get pinched... and suck air.
► Show Full Signature
2019 Ford Fusion ENERGI Titanium Plug-in Hybrid
Ford Senior Master Diesel Technician
Diesel Technician Society
Diesel Mentor Directory
B

Joined 4 mo ago
·
9 Posts
Well, I changed the fuel filters (used engine oil) but it is still giving me the low fuel pressure code. So is the next step straight to the HPFP or is there a return value or anything that could be stuck open?
B

Joined 4 mo ago
·
9 Posts
My OBDII reader shows that when the commanded fuel rail A pressure is around 35000 inHg it can do it and the read pressure is similar, but when it commands 50000 or more it doesn't make it then the message shows on the dash and the CEL comes on. If I drive light on the pedal the CEL will go off after 30 to 60 minutes.

I read in the past about the 2015 and newer pumps being better, but I am having a hard time finding any specific information on what is required for the upgrade. Does anyone have specific links.
1 - 7 of 7 Posts
Join the discussion
Continue with Facebook
Continue with Google
or sign up with email
Recommended Reading
Read More
Read More
About this Discussion
6 Replies
3 Participants
Last post:
Bugzuki 1 mo ago
The Diesel Stop
A forum community dedicated to all Ford Diesel owners and enthusiasts. Come join the discussion about PowerStrokes, performance, modifications, troubleshooting, towing capacity, maintenance, and more!
Full Forum Listing
Explore Our Forums
99 & up 7.3L Power Stroke Engine & Drivetrain 6.0L Power Stroke Engine and Drivetrain 99 & up Upgrades and Aftermarket - 7.3L Engine Power Strokes 1994-1997 General 7.3L IDI Diesels (Not Power Strokes)
Popular Communities